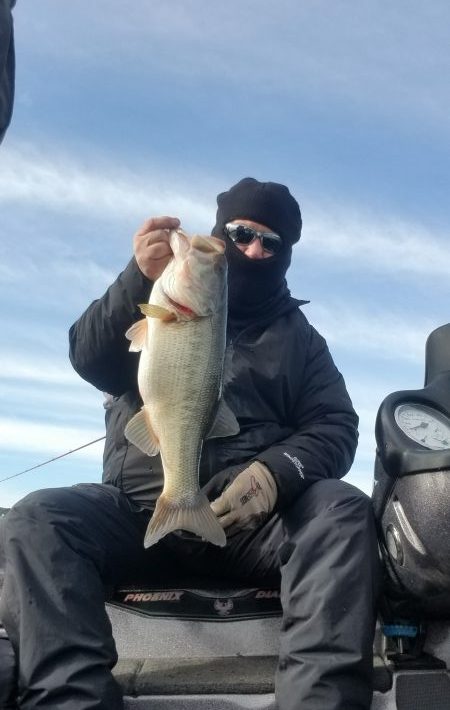 Well I finally got back out on the water after a week of being sidelined by the doctor and the flu. It was quite a change from the Last time I was out on the water ,the water temperature starting yesterday was 37 degrees, that’s a 20 degree swing from what it had been. There was warmer water to be found but where I had been fishing before the cold weather hit ,it was a big change. It was a struggle yesterday after being stuck in the house for over a week. We got back on track today catching some nice fish. We didn’t catch a lot of fish but we had some of the right ones. The only fish caught yesterday was on the 3 inch scottsboro tackle swimbaits and today we had one of our fish on a jerkbait but rest of them come on the picasso shock blade pro. I know there are guys out there that have there favorite chatter baits and one of mine is the original z man and I will always throw it at times but this new shock blade pro is a really good chatter bait that hits really hard and chatters really quick with very little movement. If you team this with the scottsboro tackle Company sniper shad it is deadly right now. We had a pretty good five fish limit today that will get you paid in most tournaments. I have some days available if you are interested in getting around some of these fish give me a call and let’s go fishing. Thanks to all of you guys and gals that have been asking how I have been I appreciate the thoughts and prayers. #AbuGarcia #Berkleyfishing #scottsborotacklecompany #freedommarinecenter #humminbird Mercury Marine #PHOENIXBOATS #PICASSOBAITS #waterfrontbayandgrocery #nathanrvparkandlodgingatmudcreek